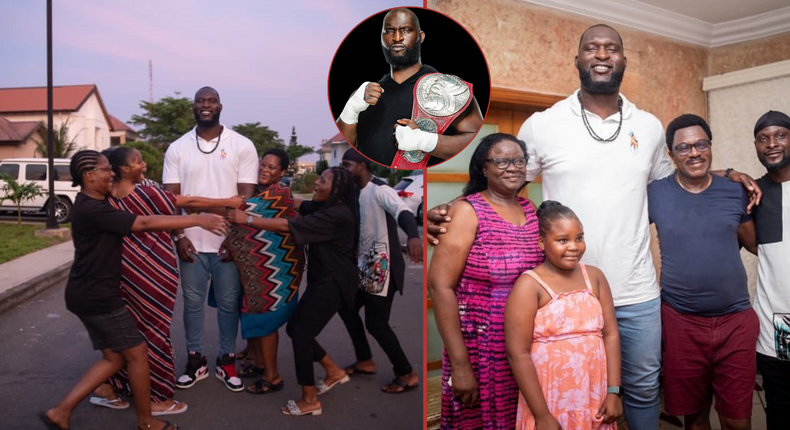 The WWE Superstar was pictured with his family members in Nigeria this week, having been away for more than a decade.

The 7ft 3inch superstar was pictured with his family members on Monday, as he was met with a very warm reception in his home in Lagos.

Having signed with WWE in 2019, Omos is a former college basketball player for the University of South Florida and for Morgan State University, where he played for a year.

He is also a former Raw Tag Team Champion in WWE, holding the titles with AJ Styles during the summer of 2021.

Here are some photos from his visit below: In January 2019, reports emerged that WWE had signed Omos alongside six other athletes to train at the WWE Performance Center.

On July 18, 2019, Omos made his in-ring debut during a July 18 house show, defeating team 2.0 (Angelo Parker and Matt Menard) in a two-on-one handicap match.

He would then keep wrestling on house shows during the following months.

However, In June 2020, he made his formal television debut during an episode of Monday Night RAW, where he was presented as a surprise member of Akira Tozawa’s ninja faction .

Because he was the tallest member of the faction, Omos was then referred to only as the “Giant Ninja” as he stood at ringside during team Tozawa’s tag match against The Street Profits and The Viking Raiders. Shortly after, he was then repackaged as a bodyguard, serving as the doorman and bouncer for Shane McMahon’s RAW Underground show.

In October 2020, after the cancellation of Raw Underground, Omos began associating with AJ Styles, and at Survivor Series, he was introduced with a new ring name, which the is known as – Omos.

In March 2021, on an episode of Raw, Omos announced that he would be making his televised in-ring debut at WrestleMania 37 alongside Styles against The New Day (Kofi Kingston and Xavier Woods) for the WWE Raw Tag Team Championship.

At the event, Omos and Styles defeated The New Day to win the titles, after Omos hit Kingston with a choke bomb and pinned him.

However, the duo (Omos and Styles) lost their Raw Tag Team Championship title to RK-Bro (Randy Orton and Matt Riddle).

At Survivor Series in November 2021, Omos participated in a 25-man dual-branded battle royal in honor of the 25th anniversary of The Rock’s debut at the 1996 Survivor Series.

Omos had the most eliminations(12) and won the match by last eliminating Ricochet. After weeks of tension between him and Styles, the pair effectively ended their alliance in 2021.

Earlier in April this year, Omos acquired MVP as his manager and began feuding with Bobby Lashley after the latter had turned on Lashley.

He defeated Lashley at WrestleMania Backlash with MVP’s help, but lost to him in a steel cage match on the May 16 episode of Raw. Lashley later ended their feud after Hell in A Cell.

After which, Omos turned his attention to the returning Braun Strowman.

The pair faced off at Crown Jewel on November 5, as the Nigerian giant fell to the ‘Monster Among Men’.