(CNN)Lionel Messi scored his first goal for Paris Saint-Germain on Tuesday night in a 2-0 victory over Manchester City in the Champions League.

The Argentine star curled home a sublime left-footed effort from the edge of the box in the 74th minute to give the French giants a two-goal advantage.
Midfielder Idrissa Gueye had given PSG an early lead, only for Manchester City coming close to equalizing as Raheem Sterling and Bernado Silva both hit the bar in short succession.
But Messi’s goal — coming in his fourth appearance since leaving Barcelona — wrapped up the group stage victory in Paris.
After the game, Manchester City manager Pep Guardiola — who coached Messi during their time together at Barcelona where they won two Champions League titles — praised the PSG star, calling the 34-year-old “unstoppable.” 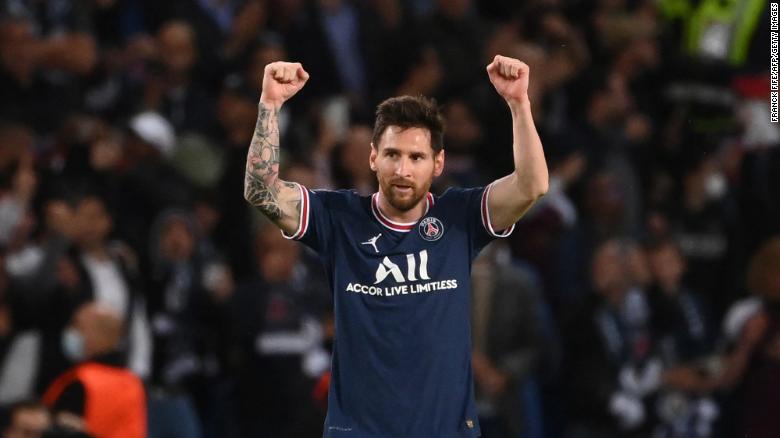 Messi celebrates after scoring his team’s second goal against Manchester City.
“We dealt with PSG first of all, but we know it’s impossible to control Leo for 90 minutes,” Guardiola said.
“He was not much in touch with the ball — of course, he was coming back from injury, he needed a bit of rhythm — but we know quite well when he can run and get close to the ball, he is unstoppable.
“What we have done is minimize, as much as possible, these kind of options and create the chances that we could create and I’m satisfied with the way we played.
“People can’t deny that we were there. We arrived here, we did our game, but it’s always a risk when you lose the ball and they can make one pass, especially with (Marco) Verratti — an exceptional, extraordinary player — and make contact with Neymar and Messi and they can run, it’s difficult.”
After he scored his goal and as PSG attempted to hold on for the victory, Messi did his part for the team, laying down behind a defensive wall at a freekick to prevent a shot being taken underneath it and surprising goalkeeper Gianluigi Donnarumma.
However, former Manchester United and England defender Rio Ferdinand believed a player of Messi’s caliber shouldn’t have been made to perform such a duty.
“The moment Mauricio Pochettino asked him to do that at the training ground, someone should’ve gone in there and said: ‘No, no, no, no, no, no.’ This doesn’t happen to Leo Messi,” Ferdinand, a Champions League winner with Manchester United in 2008, said on BT Sport.
“No, no, no, no. You can’t. It’s disrespectful, I wouldn’t have it. If I was in that team, I’d have to say: ‘Listen, I’ll lay down for you.’ Sorry, I couldn’t have him laying down like that. I can’t see it. He don’t get his kit dirty, that’s not what Messi does.” 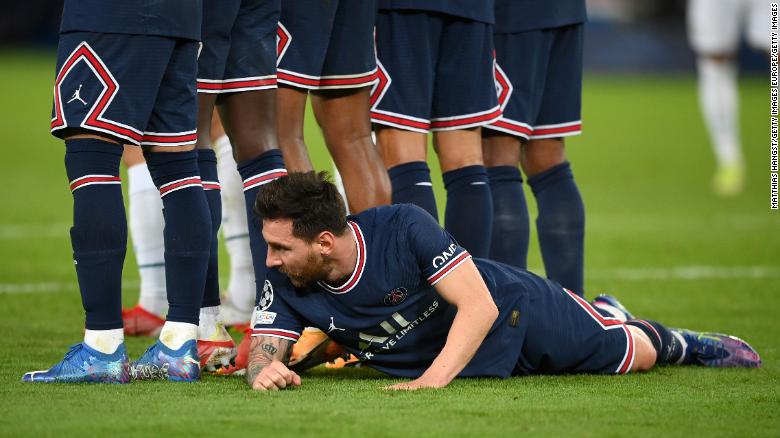 Messi lies behind the PSG wall as they defend a free kick against Manchester City.
Improving
Messi signed a two-year deal at PSG in August, ending his two-decade spell at Barça.
During his first three games for the club, which were blighted by a lack of preseason training and injury, Messi hardly set the world alight, failing to record a goal or an assist.
On his home debut for PSG, seemingly to the six-time Ballon d’Or winner’s chagrin, he was substituted by manager Mauricio Pochettino in the second half as his side went in search of a winning goal against Lyon. Pochettino and Messi didn’t shake hands and the pair had a brief exchange as Messi made his way to the bench.
PSG went on to win the Ligue 1 clash thanks to a Mauro Icardi header in stoppage time and Pochettino defended his decision to replace Messi.
However, at the Parc des Princes on Tuesday against Manchester City, the Argentine superstar looked somewhat back to his dominant best, picking up his typical trademark pockets of space and combining well with Kylian Mbappé and Neymar.
And just over 15 minutes from the end of the match, with the result still hanging in the balance, the Parisian crowd got what they wanted as Messi used his trademark left foot to score past a rooted-to-the-spot Ederson.
Visit CNN.com/sport for more news, features, and videos 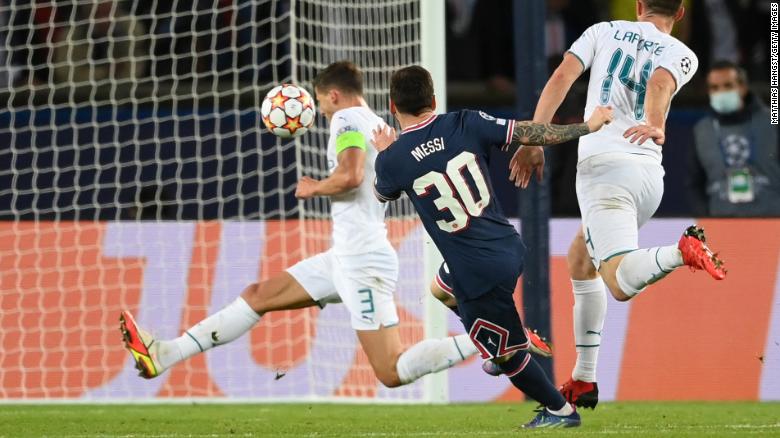 Messi scores PSG’s second goal against Manchester City.
The goal — his 121st in the Champions League — was his 27th in 35 appearances against English teams in the Champions League; 15 more than any other player in the competition.
He also became just the second player to score in 17 consecutive Champions League seasons after Real Madrid forward Karim Benzema.
Afterwards, Messi stressed the importance of earning a positive result after PSG’s disappointing opening 1-1 draw against Club Brugge.
“I hadn’t been able to play recently and this was only my second game in this stadium,” he told Canal+.
“I’m adapting to my new team. The more we forwards play together, the better our relationship will be. We all need to grow together and improve and keep giving our best.”
AUTHOR: Ben Morse
DATE PUBLISHED: September 29, 2021
SOURCE: Edition.cnn.com
PHOTO CREDIT: Edition.cnn/Theguarding
Share. Facebook Twitter Pinterest LinkedIn Tumblr Email