Nigerian-born Dutch star, Arnaut Danjuma, who plays as a winger for Spanish club Villarreal, has claimed they are confident they’ll beat Manchester United when they meet in their Champions League clash tonight. 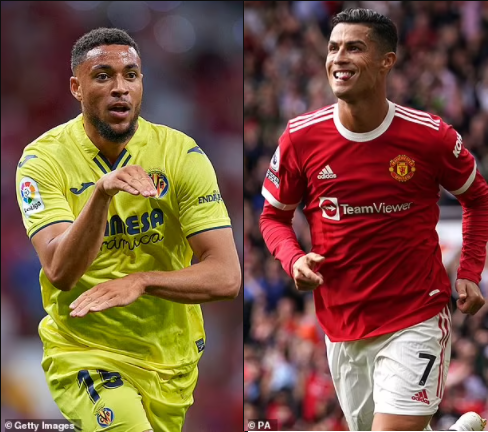 Danjuma, who sealed a £21million move to Villarreal during the last transfer window,  has three goals in his last five games with the Yellow Submarinem and will be looking to help defeat Manchester United.

Speaking ahead of the clash, the 24-year-old winger who grew up idolising Cristiano Ronaldo, said: ‘I am secretly a fan of Ronaldo!’.

‘He is definitely a player I have always looked up to and I respect him in a lot of ways.

With this game expected to be a rematch of the Europa League final, where Villarreal won on penalties, Danjuma said his teammates are not scared of facing them again.

‘Scared? That’s a bit of an exaggeration,’ he says. ‘You definitely you need to keep a five time Ballon D’or winner in the back of your head, but I think we’re confident.

‘You need to be aware of great players and [Ronaldo] is one of them, so we obviously keep him in the back of our mind and during our analysis.

‘You can’t be impressed with others players on the pitch. I think I’ve got the balance very well – I’ve got the personality to step on the pitch and respect the opposition, but then again it won’t influence the game in any way. I need to play all the way for my teammates and I’ll do that the minute the whistle blows.’

On what Villarreal’s strategy would be, he said the team had a ‘very good game plan’ to hurt United.

‘Against every team we’ve got a certain game plan,’ he added. ‘I think that’s one of the very good qualities of Unai and I think that’s the reason why they won against United and Arsenal.

‘We have a very good game plan in hand against United. I’m not sure if I can lay it on the table, but we certainly have a way of how we want to win there.’