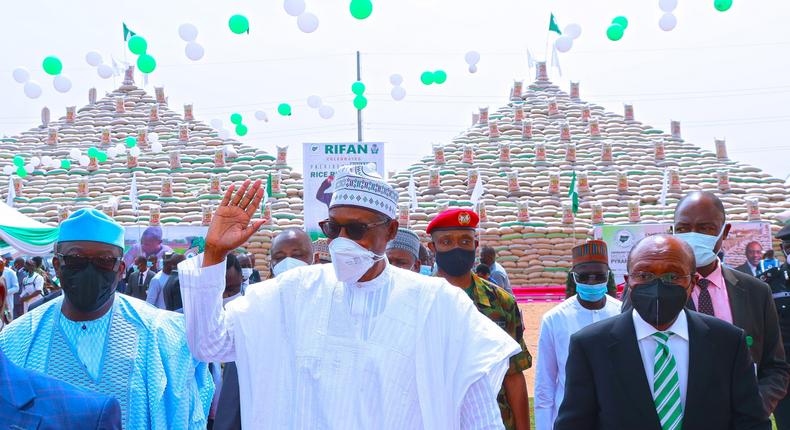 Unveiling the FCT Mega Rice Pyramids at the Abuja International Trade Fair Complex, Buhari said the event showed that the country was making steady and assured progress towards self-sufficiency in food production.

The president expressed the commitment of his administration towards implementing home-grown policies targeted at securing food for all Nigerians.

According to him, the unveiling of the pyramids is a testament to the fact that the Anchor Borrowers’ Programme of the Central Bank of Nigeria (CBN) has started yielding fruitful results.

He urged other agricultural commodity associations that were yet to participate under the Anchor Borrowers’ Programme to emulate the Rice Farmers Association of Nigeria (RIFAN) in supporting federal government’s drive for food self-sufficiency.

He said: “Fellow Nigerians, our gathering here today, is no doubt a testament to the fact that the Anchor Borrowers’ Programme is working.

“Indeed, these sky-high pyramids for which we are gathered here to commission are part of our commitment at achieving national food security and economic diversification through home-grown policies targeted at securing food for all Nigerians.

“As a critical policy of the government, the Anchor Borrowers’ Programme is expected to catalyse the agricultural productive base of the nation,”. 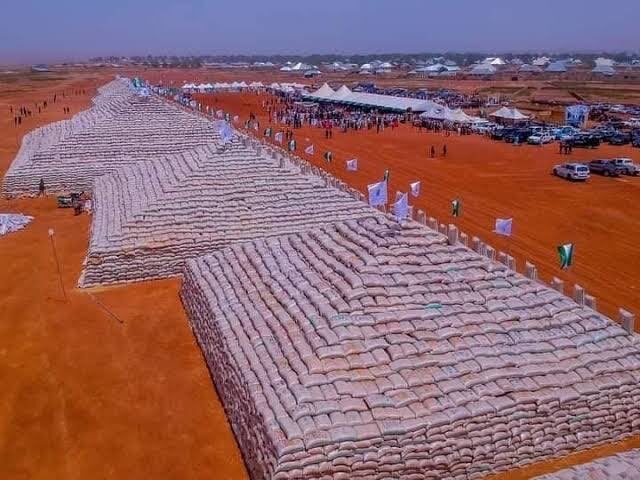 This, he said, was a major part of the economic plan to uplift the economy, create jobs, reduce reliance on imported food and industrial raw materials, and conserve foreign exchange.

He maintained that, in the implementation of the Programme, adoption of high-yielding seedlings, quality inputs and best farming practices were essential features.

The president recalled that about three years ago, the first set of sky-high pyramids of rice harvests were showcased in Argungu, Kebbi.

“Later, in May 2021 the CBN unveiled the first rice pyramids in the South-West of Nigeria in Ado Ekiti, Ekiti State.

“Those events were historic as, first, they remind us of our yester-year’s agricultural commodity pyramids, such as the groundnut pyramids in Kano and secondly, they symbolize that we can produce what we eat.

“The significance of today’s occasion can be better understood by looking at the various economic strides the administration has achieved through agriculture,” he explained.

He said to achieve this, the Anchor Borrowers’ Programme was designed to encourage investments in agriculture and empower smallholder farmers as drivers of transformation in the agricultural sector.

The president, therefore, expressed delight that the Programme had continued to receive commendations, since its introduction six years ago, as it has become one of the reference points in the administration’s agricultural revolution effort.

According to him, the Anchor Borrowers’ Programme has so far supported over 4.8 million smallholder farmers across the country for the production of 23 agricultural commodities including maize, rice, oil palm, cocoa, cotton, cassava, tomato and livestock

“In fact, the Programme speaks loudly in its giant strides as it has increased access to finance by our rural farmers, who before now were virtually excluded from the financial system.

The president also expressed the hope that the massive production of rice would translate to reduction in the price of the commodity in the markets across the country.

“I am aware that the bags of paddy will be moving straight from here to rice milling plants across Nigeria, which lead to the release of processed rice to the markets by rice millers.

“The measure will aid our efforts at reducing the price of rice in Nigeria.

“Before this administration launched the ABP, there were only 15 standard Rice mills in Nigeria. As at today, we have over 50 Standard and integrated Rice mills creating jobs and reducing unemployment.

“We expect additional significant output when two new mills are started in Lagos and Katsina.

“I am also aware that because of the large margins in this business, more people are showing interest in investing in our agribusiness,’’ he added.

Buhari noted that the improved rice seedlings had helped to ensure the achievement of rice sufficiency, “as they are disease-resistant and have an average yield of about 5 metric tonnes per hectare, compared with the traditional national average of 1.5 metric tonnes’’.

He added that, this had resulted in bridging the rice consumption gap, a significant reduction in rice imports, and saved the nation foreign exchange.

In his welcome address, the Chairman, Rice Farmers Association of Nigeria, Alhaji Aminu Goronyo, lauded the Buhari administration for initiating the agricultural revolution programme, which he said had translated into wealth for farmers across the country.

He thanked the president for keeping the promise he made to Nigerians in 2015 and 2019, while campaigning for election and reelection respectively.

Goronyo said the rice pyramids unveiled by the President was the largest in the world.

“Mr President, you can see your hand work. It is a statement you made during your campaign and it is fulfilled. You said you will pay more attention on agriculture and it has happened.

“You have put this country on track. You have helped us attain food security which translates to national security, and the President that succeeds you should pay attention to that too,” he said.

In his remarks, the Governor of Central Bank of Nigeria, Godwin Emefiele, described agriculture as the focal point of the Buhari administration.

“I am particularly delighted because these stacks of rice pyramids provide undisputable and unassailable evidence of significant progress under President Buhari’s food security initiatives and administration.

“I personally salute your vision of making agriculture a corner stone and one of the focal points of your administration,” he said.

He saluted the farmers for summoning courage to embark on agricultural activities despite security challenges in some parts of the country.

The News Agency of Nigeria (NAN) reports that goodwill messages were delivered at the event by Governors of rice producing States of Ekiti, Kebbi, Ebonyi, Cross River, and Jigawa.