Tottenham’s Erik Lamela won the Premier League Goal of the Season award for his spectacular Rabona in the north London derby.

Dias completes an individual award double after winning the Football Writers’ Association award in May, beating his City team-mate Kevin De Bruyne – who won the Premier League Player of the Season award last season – and Tottenham striker Harry Kane to the honour. 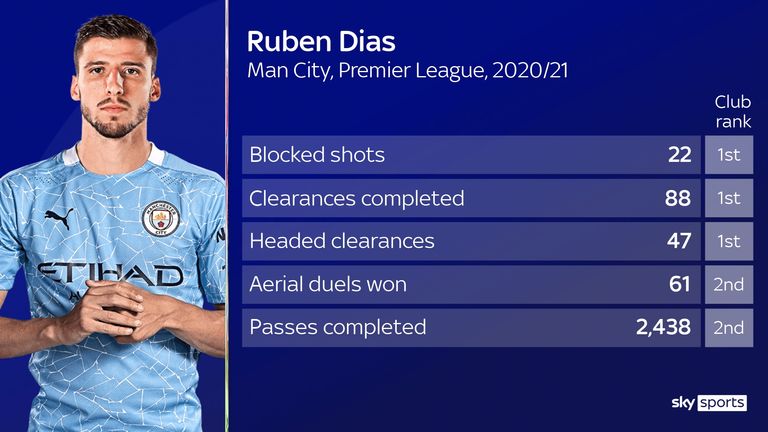 After joining from Benfica last summer for £65m, Dias made 32 league appearances for Man City this season, scoring one goal and helping his side register 15 clean sheets when he played.

His partnership with John Stones at the heart of Guardiola’s defence, which conceded only 32 goals in total in the league, played a key part in City’s Premier League triumph.

After just one win in their first three league games, Dias’ increasing influence in the side helped them go on a staggering 21-game win streak in all competitions, including 15 successive victories in the Premier League.

Foden picked up the award for Young Player of the Season ahead of City team-mate Dias, who was already nominated, as well as Dominic Calvert-Lewin, Illan Meslier, Marcus Rashford, Mason Mount, Declan Rice and Bukayo Saka.

The 21-year-old was involved in 14 Premier League goals in 17 starts and 11 substitute appearances across the campaign as he established himself as a key member of the City midfield following the departure of David Silva.

Foden becomes the second recipient of the award, presented to the best player aged 23 or younger, after Liverpool’s Trent Alexander-Arnold won the prize last season. The Spaniard guided City to their fifth Premier League title and his third in four seasons in England.

Guardiola’s team boasted the most goals scored (83) and the least goals conceded (32) across the campaign and produced a remarkable 15-match winning streak mid-season.