World number three Rafael Nadal has pulled out of this month’s Wimbledon and the Tokyo Olympic Games.
The 20-time Grand Slam champion, who won the Wimbledon titles in 2008 and 2010, says he needs to “recuperate after a long clay-court season”.

“It’s never an easy decision but after listening to my body and discussing it with my team I understand that it is the right decision,” said the Spaniard.

“The goal is to prolong my career and continue to do what makes me happy.”

The 35-year-old added: “That is to compete at the highest level and keep fighting for those professional and personal goals at the maximum level of competition.”

Nadal hinted at the decision after his defeat by Serbia’s world number one Novak Djokovic in the French Open semi-finals last week.

If defending champion Djokovic wins the title at the All England Club, it will move him level with the record shared by Nadal and Switzerland’s Roger Federer of 20 men’s major singles titles.

Nadal said the shorter turnaround between the French Open and Wimbledon – which starts at the All England Club on 28 June – was a key factor in his decision.

The French Open was pushed back a week by Roland Garros organisers in order to start the tournament with fewer of the country’s coronavirus restrictions in place – including allowing fans in to watch.

“The fact that there has only been two weeks between Roland Garros and Wimbledon didn’t make it easier on my body to recuperate after the always demanding clay-court season,” Nadal said in a Twitter post announcing the news.

“They have been two months of great effort and the decision I take is focused looking at the mid and long term.” 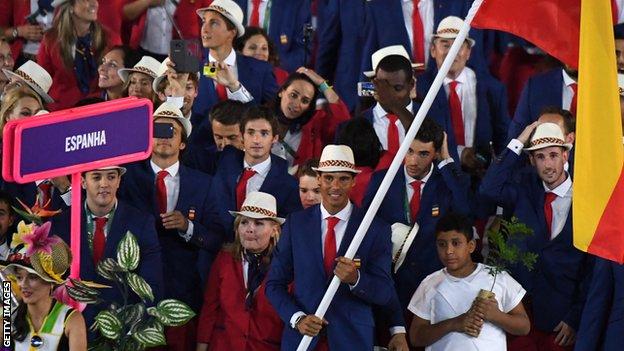 Nadal struggled with a back injury earlier this year, playing only the Australian Open – where he lost in the quarter-finals – before the clay-court season started in mid-April.

On his favourite surface the Mallorcan left-hander won the titles in Barcelona and Rome before losing to Djokovic at Roland Garros.

“Sport prevention of any kind of excess in my body is a very important factor at this stage of my career in order to try to keep fighting for the highest level of competition and titles,” Nadal added.

The decision also means he will miss the delayed Olympics, which start in Tokyo on 23 July. Nadal has won two Olympic gold medals – in the singles at Beijing 2008 and the doubles at Rio 2016.

“The Olympic Games always meant a lot and they were always a priority as a sportsperson, I found the spirit that every sportsperson in the world wants to live,” Nadal said.

“I personally had the chance to live three of them and had the honour to be the flagbearer for my country.”

A two-week gap between Roland Garros and Wimbledon could lead to quite an unpredictable fortnight on the grass, as players have less time than usual to recover physically and to make the transition from clay.

And, sadly, it has also contributed to Nadal’s decision.

He already has two Olympic gold medals, and must feel his best chance this year of winning a Grand Slam will come at the US Open from the end of August.

At 35, and with a history of physical problems on the grass, the Spaniard needs some time to clear his mind after a hectic clay-court season.,

Some golf and some fishing usually does the trick, before Nadal turns his attention to training for August’s North American hard-court swing.