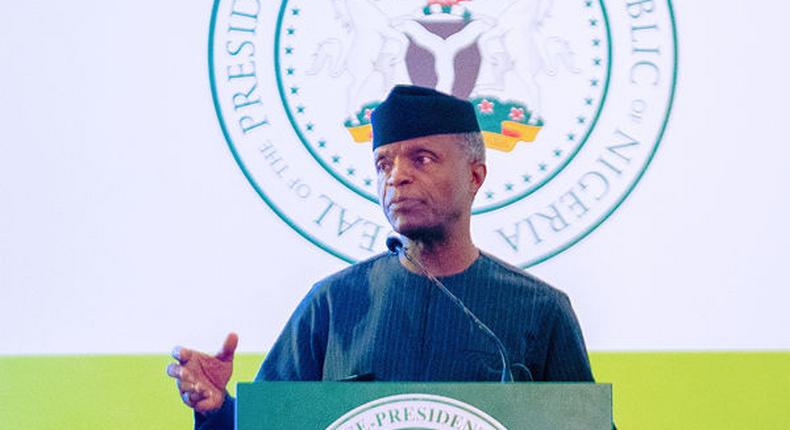 Vice President Yemi Osinbajo has inaugurated the Nigeria COVID-19 Action Recovery and Economic Stimulus (NG-Cares), which will be implemented with a 750-million-dollar World Bank facility.

The vice president performed the inauguration on Thursday, January 20, 2022, as prelude to National Economic Council (NEC) meeting which he chaired at the State House Banquet Hall, Abuja.

He said that under the NG-Cares, which would be for a two-year-period — 2021 to 2023, each state would get 20 million dollars, while the Federal Capital Territory (FCT) would get 15 million dollars.

He explained that “NG-Cares is a multi-sectoral programme designed to support vulnerable and poor Nigerians to provide essentially emergency relief to small holder farmers and MSMEs, especially those that were adversely affected by the COVID-19 pandemic.

“The programme will build on the varied and extensive Federal Government interventions developed as part of the president’s plan for taking 100 million Nigerians out of poverty and in response to the severe socio-economic fallouts of the pandemic, especially those programmes and plans contained in the Economic Sustainability Plan (ESP).

“The essential addition to the Federal Government’s programme is that the NG-Cares programme will leverage on existing programmes in the states, especially job creation programmes, wealth creation, poverty reduction programmes at the community level such as state cash transfer units, state Fadama or agriculture development agencies, state job creation units and MSME units.

“All of the support by Government Enterprise and Empowerment Programme (GEEP).

According to him, the programme is to be driven by the states and there will be a programme for result-delivery mechanism type in which case, performance must be shown.

He said that the Federal Government also regarded the programme as an important complement to its own scaled-up number of beneficiaries of social transfer.

He noted that “subsidy and grants to support individuals, households and MSMEs in the multi-year development plan for 2021-2024 was developed in the context of the response to the COVID-19 crisis and the ESP.

“That plan serves as a bridge to ensure successful programme implementation. The Federal Government will provide quality assurance, monitoring, capacity building and technical assistance to states and the FCT on project activities and results.

The vice president said he was looking forward to prompt and effective implementation of the programme both at the federal and state levels.

He urged stakeholders to deploy their wealth of experience and expertise to ensure successful take off and implementation of the programme.

In his address, the Minister of State for Budget and National Planning, Clem Agba, said that the vision, concept and design of NG-Cares was derived from the novel social protection agenda of President Muhammadu Buhari’s administration.

He said that the framework of the NG-Cares programme was within the context of the ESP and the National Development Plan 2021 to 2025, developed in the wake of the COVID-19 pandemic.

According to him, the objectives of the NG-Cares are; to expand access to livelihood support, food security services and grants for the poor and vulnerable households and firms.

He said “its genesis was described by the Minister of State earlier on — after the onset of the pandemic.

“When it became clear that for Nigeria, possibly, the greatest impact of the COVID-19 pandemic globally will be the impact on the livelihoods of small businesses; of poor and vulnerable households and farmers here in Nigeria, the socio-economic impact.

In his remarks, Gov. Kayode Fayemi of Ekiti and Nigeria’s Governors Forum Chairman, said NG-Cares was designed jointly with the World Bank team as complement to the ESP.