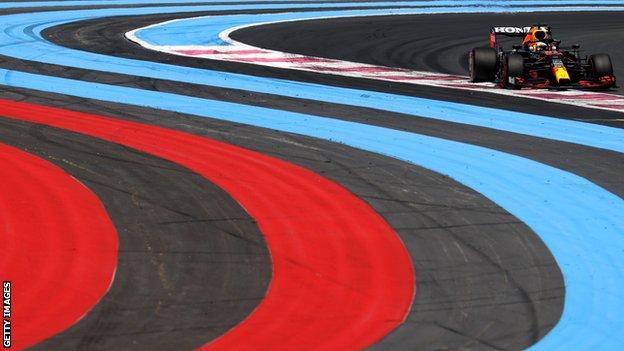 Red Bull’s Max Verstappen set the pace ahead of the Mercedes cars of Valtteri Bottas and Lewis Hamilton in second practice at the French Grand Prix.

The Dutchman led Bottas by just 0.008 seconds, with Hamilton 0.253secs off the pace and complaining that there was “something not right with the car”.

Verstappen and Hamilton set their fastest times – as expected – on the soft tyre while Bottas was on mediums.

The session raised many questions about the weekend to come as the teams were finding their cars behaved very differently across the different tyre compounds.

Bottas’ fastest time was set on the theoretically slower medium tyre as he failed to improve on the soft.

And while Verstappen found an extra second’s worth of lap time when he switched to the soft tyre, Hamilton improved by only 0.1secs.

The world champion, who trails Verstappen by four points in this year’s title chase, was struggling to match Bottas all day and his radio message to engineer Peter Bonnington mid-session suggested he felt something fundamental was wrong.

However, Hamilton was losing time on the straights compared to both Bottas and Verstappen, which suggests he was running in a lower power mode and could well account for the performance difference. When the drivers ran their race-simulation runs on full fuel loads later in the session, Verstappen appeared to have a slight edge on Hamilton but the overall indications were that the two cars were closely matched.

Hamilton also appeared to be struggling when the drivers did their race simulation runs on full fuel loads later in the session, when he was also slower than Verstappen.

Bottas ran a different tyre strategy for his race runs so his times were not directly comparable to the other two.

It was the first time Mercedes had been outpaced in a practice session at the Paul Ricard track since it returned to the calendar in 2018. There was no French race last year as a result of the pandemic.

After the session, Hamilton said: “Quite a struggle this weekend. Probably for everyone.

“I don’t know if it’s the track surface or the track temperature, or these inflated tyres – they have put the pressures up higher than ever before, one of the highest, but we are all sliding around and it’s a struggle out there for everyone.”

Pirelli have raised the level by 2psi over the figure they had intended before the failures in Baku.

In addition, there are more stringent checks on tyre pressures.

Another technical change this weekend is tougher rear-wing flexibility tests, after accusations that Red Bull and other teams have been running rear wings that flex back on straights in ways that contravene the intention of the rules.

The only cloud over Verstappen’s day was that he damaged his front wing running wide over the kerbs at Turn Two. That promoted Red Bull sporting director Jonathan Wheatley to ask whether the kerbs could be removed to avoid car damage and police track limits with an electronic timing loop.

Wheatley’s message echoed one from his opposite number at Mercedes, Ron Meadows, who asked the same after Bottas ran wide in the first session. Both pointed out that the damage was costing hundreds of thousands of pounds for a small indiscretion.

Race director Michael Masi pointed out that several team bosses had asked for physical track limits but said he would look at the issue before Saturday’s running.

Perhaps the most impressive day came from the Alpine team, for whom Esteban Ocon added sixth fastest time to Alonso’s fourth.

Leclerc, after a difficult morning for Ferrari, improved in the afternoon to split the Alpines, with Pierre Gasly’s Alpha Tauri in seventh, ahead of the second Ferrari of Carlos Sainz, Kimi Raikkonen’s Alfa Romeo and McLaren’s Lando Norris.

The Aston Martins of Sebastian Vettel and Lance Stroll were down in 15th and 16th.

This weekend’s race takes place against the backdrop of two significant rule changes.

There are more stringent checks on both tyre pressures and rear wing strength after two controversies this year – the tyre failures suffered by Verstappen and Aston Martin’s Lance Stroll at the last race in Azerbaijan, and accusations that Red Bull and other teams have been running rear wings that flex back on straights in ways that contravene the intention of the rules.