The upcoming performance featuring some of hip hop’s most iconic acts comes as the the Super Bowl – the showpiece event of American football – returns to the Los Angeles area for the first time since 1993. 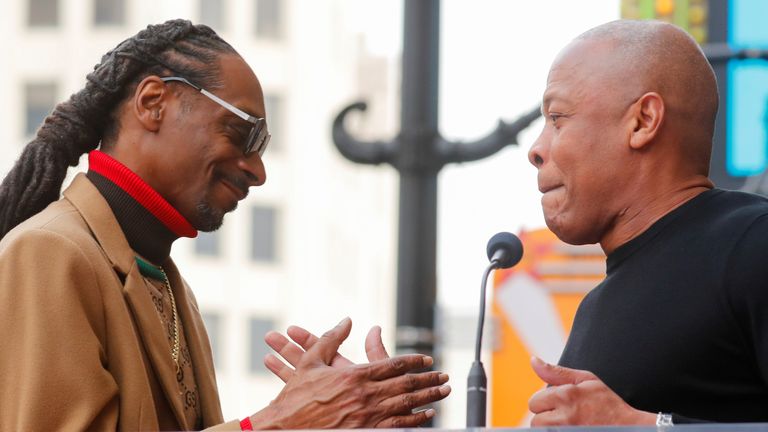 The NFL said they will be joined by Mary J Blige and Kendrick Lamar at the SoFi Stadium in Inglewood, California, on 13 February.

The five music stars, who have 43 Grammys between them, will perform together for the first time ever in a show that will likely draw millions of viewers.

Dre helped launch the careers of some of hip hop’s greatest – including Snoop Dogg and Eminem – and the trio will work together for the first time since Dr Dre’s multi-platinum-selling album 2001, which was released in 1999 – despite Eminem and Dre performing together at the Coachella festival in 2018.

“This will introduce the next saga of my career,” Dr Dre wrote on Instagram.

“The opportunity to perform at the Super Bowl LVI half-time show, and to do it in my own back yard, will be one of the biggest thrills of my career,” he said in a statement.

The seven-time Grammy winner added that the half-time performance will be an “unforgettable cultural moment”.

Dre, Snoop and Pulitzer prize winner Lamar, who announced he will release his final album for Top Dawg Entertainment in August, all hail from Los Angeles in southern California.

The performance comes as the the Super Bowl – the showpiece event of American football – returns to the Los Angeles area for the first time since 1993.

Last year’s game was played at the Raymond James Stadium in Tampa, Florida, with The Weeknd performing at the half-time show.

Tom Brady’s Tampa Bay Buccaneers beat the Kansas City Chiefs 31-9, in a match that saw crowds limited to 25,000 due to COVID-19 restrictions.

For the past three years, the half-time show has been produced by the NFL, Pepsi and Roc Nation, Jay-Z’s entertainment company.

Jay-Z said in a statement that the show will be “history in the making”.

A host of superstars have previously performed during the half-time show, including Beyoncé, Madonna, Coldplay, Katy Perry, U2, Lady Gaga, Michael Jackson, Jennifer Lopez and Shakira.