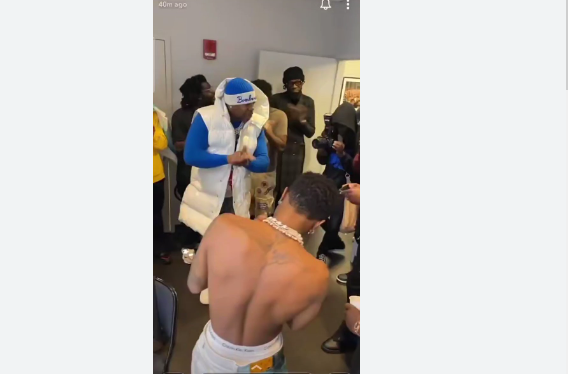 Busta Rhymes, the ace US rapper, has hailed Wizkid after his sold-out concert at the iconic Madison Square Garden in New York.

On Wednesday night, Wizkid delivered a live rendition of some of his hit songs — mostly from his fifth album titled ‘More Love, Less Ego’.

The ‘Ojuelegba’ singer had earlier announced that he sold out the 20,000-capacity venue.

In a now-viral video, Rhymes was seen commending the achievement of the Nigerian singer.

The rapper described Wizkid as “incredible”, adding he has never seen an artiste with such a vibe.

“This is one of the first times I’m experiencing a venue of this size filled up in my city. Your vibe is something different, never experience this. Incredible job. You got all the legendary status there’s to achieve,” he said.

The rapper also hinted at collaborating with Wizkid. “It’s time for you and I to get into the kitchen and cook something,” he added.

Wizkid joins the likes of Michael Jackson, The Beatles, Adele, Rihanna, Jay-Z, Justin Bieber, and  Mariah Carey who have sold out the famous arena.

He also becomes the second Nigerian singer to headline a concert at the venue after Burna Boy achieved the feat in April.

The ‘Fever’ singer has established himself as a household name in the global music industry with several awards and recognition.

He has also collaborated with numerous international music stars.

Your VIP Access into the “Black Panther: Wakanda Forever” African Premiere with the Stars