Boomplay streams are calculated based on industry-recognized standards in which only no less than thirty-second stream is equal to one stream count. Barely a year after Burna Boy was celebrated as the first artiste to hit the 100 million streams milestone on Boomplay, he has gone ahead to double the feat, making him the first African artiste to be streamed 200 million times on Africa’s #1 streaming service, Boomplay. 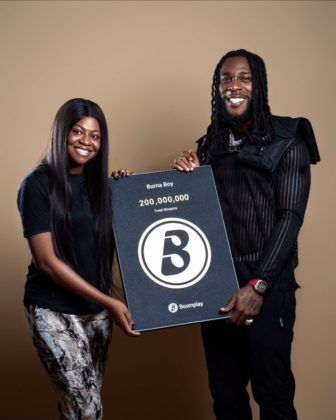 The growth of the Grammy award winner has been exponentially upturned since the release of the Outside album, which stands as 10 million streams currently. His follow up album, African Giant, which was critically acclaimed and nominated for the Grammys, now has over 43 million streams, four times more than the previous body of work, indicating his broadening fanbase and growth. True to its title, his 2020 album Twice As Tall has been streamed twice more than African giant, standing at over 80 million streams on Boomplay. 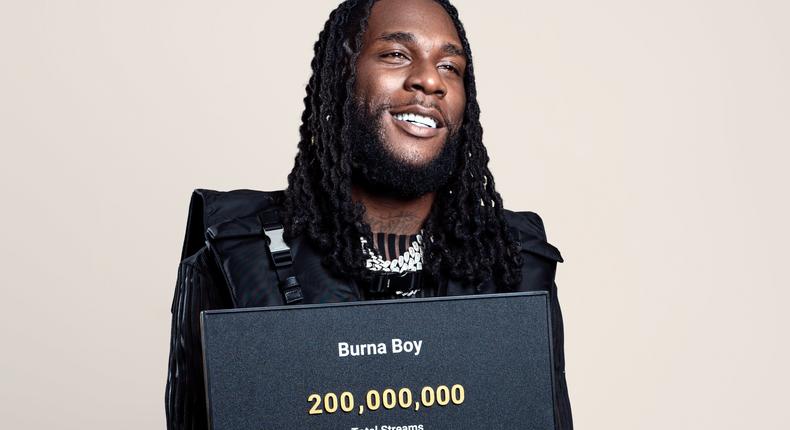 Tosin Sorinola – Boomplay’s Director of Artist & Media Relations, who presented a plaque in recognition of this feat to the Afrofusion musician in Lagos, Nigeria, said this was an epochal moment in the history of the African music market. She said ‘This is another iconic feat for Burna Boy, Boomplay and the entire African music industry. This achievement shows that fans in Africa are fast catching up to the digitization of music and streaming, which Boomplay is championing. With this development, artistes can earn even more on our platform. Burna Boy is a massively talented singer whose works will continue to affect people positively across Africa and the rest of the world. We are proud of what he is doing and his milestone achievements on Boomplay; to this effect, we, at Boomplay, present this plaque to him in special recognition of his contributions so far in the industry and are looking forward to even more extraordinary achievements.’

With Boomplay’s aim to bring everything music to Africa and take African music to the world, the service is committed to empowering the African music ecosystem to unlock its full potential. Boomplay has the most extensive catalogue of African music with over 70 million tracks at the moment and 65million monthly active users.

Guchi releases the visuals for her captivating single, ‘I Swear’ feat Yemi Alade