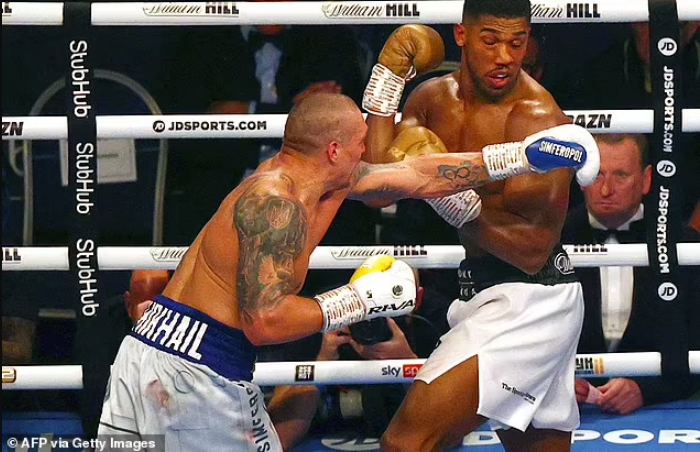 AJ suffered his second career loss at the Tottenham Hotspur Stadium on Saturday night, September 25, with his Ukraianian opponent winning the fight with a decisive and unanimous points victory to become the new heavyweight champion of the world.

In the final 30 seconds of the bout, it appeared there was discrepancy between the nine seconds left on the on-screen clock before the fight was concluded.

As shown by DAZN, the final nine seconds – as per the clock seemed to end in just three seconds with Joshua all at sea and on the verge of being knocked out.

This has been noticed by fans online, with one asking: ‘Anyone notice at the end of the 12th round the bell range 7 seconds early, was this to save Joshua getting knocked out?’

Another said: ‘They rang that bell 5 second early lol, saved Anthony Joshua from a 12th round KO,’ and another noted towards the Tottenham location: ‘Is it just me or did the bell go early in the 12th round?

‘It could be a mismatch between the on-screen time and the actual fight clock but just seems a little suspicious, especially in London.’ 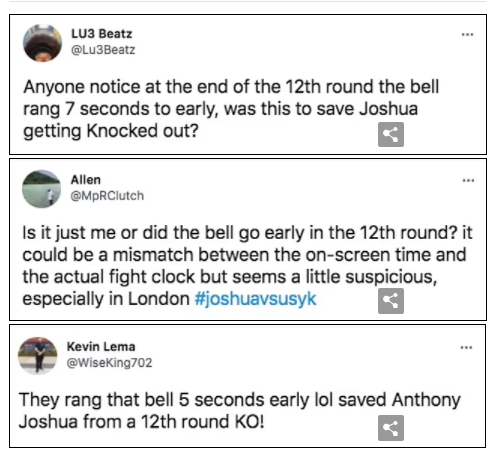 Joshua’s rival Dilian Whyte also noted the seemingly early stoppage and added the referee should have stopped the fight, telling iFL TV: ‘I thought Usyk was going to win by TKO in the last round.

Recall the  Ukrainian, who is undefeated as a professional boxer – 19-0 with 13 KOs, disclosed his trainer ‘pushed’ him not to knock out Anthony Joshua on his way to his stunning victory.

He said: ‘I had no objective to knock him out because my trainer, in my corner, pushed me not to do that.

‘In the beginning I hit him hard and tried to knock him out. But then my trainer said: “Just stop, and do your job”.’