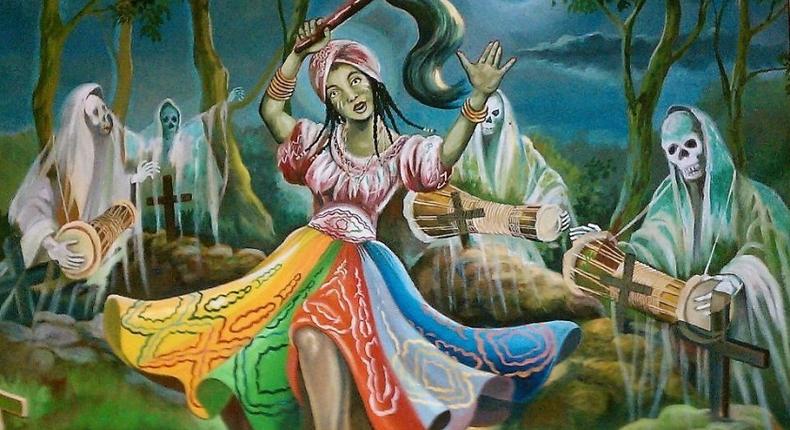 “Oya” means she tore. She also goes by the name Ọya-Ìyáńsàn-án meaning the mother of nine. Oya was barren and could only have stillborns. She gave birth to nine children but they all came out dead.

Oya and Shango are the children of the mother of the sea, Yemoja.

According to the mythology, Oya decided to get rid of the plague of barrenness by making a sacrifice from cloth with the colours of the rainbow. She then gave birth to nine children, four sets of twins and a ninth child, Egungun.

Oya is popularly known as the goddess of weather. She can call forth lightning, storms, tornadoes and earthquakes. Whatever weather conditions she feels like bringing about, she does. She is the guardian of the graveyard, the goddess in charge of cemeteries. Cemeteries are important in traditional religion for people seeking favours from her. Because of this, she is called the Great mother of witches or the elders of the night.

Oya has psychic abilities. She could perceive things beyond this world and call forth the dead for discussions. She can even hold them back if she feels they have unfinished business on earth.

Once angered, she can destroy villages and communities with floods and any other natural disaster she deems fit. She is fierce because she hates lies and injustice and would not refrain from pouring her wrath on those who dare her.

Finally, the Niger River is named after her as she is the patron. The Niger river is called Odo Oya.

Ijaw Culture: A brief walk into the lives of one of the world’s most ancient people

A Warm Welcome from the people of Africa