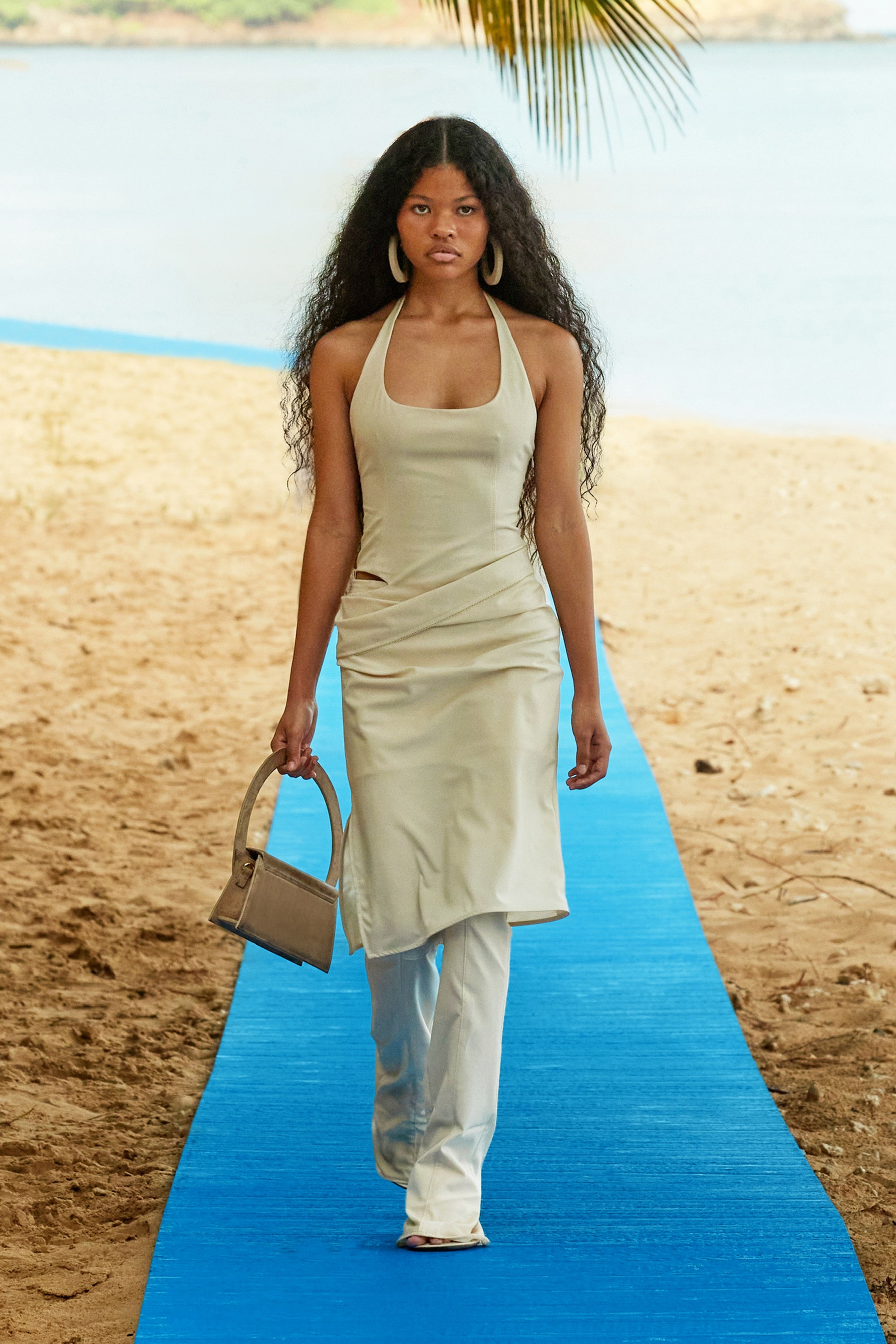 A cobalt catwalk cut across the sand of the Moli’i Gardens’s beach on the northern side of Oahu. Rain fell by the bucketload, and guests crowded under their black umbrellas. One said that the rainstorm, which postponed Jacquemus’s Hawaiian debut by about an hour and a half, could be interpreted as a blessing. When the rain cleared and the show started, an actual Hawaiian blessing was performed, giving thanks to the land, people, and history of this place. The sun faded into the Pacific; the waves lapped the shore. It was beautiful and peaceful and (thanks to a P.R. request) without a cell phone in sight. Then came the fashion.

Linen sets the color of sand opened the show, exploding into Hockney blue, shocking pink, and inky black swimwear by the end. Simon Porte Jacquemus’s proportions are intentionally abnormal—one part ruched, another cutaway. For spring 2022, he played with the shapes of scuba gear, cutting and winding unitards and bodysuits into tailoring. Some of the best dresses and trousers unfolded around one hip like a sarong, sexy and uncomplicated in their appeal. Backless blazers furthered the idea, though Jacquemus’s cargo trousers and board shorts might have a longer shelf life. Elsewhere, he played with short-over-long styling, garments worn in an illogical order for optimal optical appeal. He also introduced a new beadwork collaboration with the artist Tanya Lyons designed to look like water droplets.

The decision to take his runway show on the long road from France to Hawaii was a big step for Jacquemus and his brand—one that was not met entirely with praise. For some fashion followers, the choice to hold a destination show in a place connected with colonialism and tourism was a misstep. But to many of the local guests in the audience, seeing a European designer arrive islandside was affirming. Along Waikiki’s main drag, luxury stores abound, and yet none of those designers have ever held a show on the island or maybe even set foot here.

With the help of Hawaiian-born-and-raised stylist Ben Perreira and creative director Taylor Okata, Jacquemus worked to create a show that honored the local community. Only a handful of Jacquemus’s European staff traveled to the island, and only guests from the Pacific region and mainland United States were invited. Every model was local to the region, and for most, it was their first runway. The entire production crew was local. “Working in fashion, nothing has felt as fulfilling as this,” said Perreira preshow.

“It’s time to speak about something else,” said Jacquemus of his choice to present his collection outside France. “I think the Jacquemus woman is not French—she is a sunny person. That’s what the brand is about: sharing, sun, love, and family.” The Jacquemus woman—and man—is also ironic, using a scuba snorkel as a handbag handle or wearing a leather floatie as an accessory. This irreverent, Pop point of view comes with a heaping soupçon of sincerity, which helps make Jacquemus’s humbly haute clothing so popular among millennial and Gen Z fans. It’s high-minded fashion with a friendly face.

But after such a bombshell show, well, what else is there to do but change? “This is my last Pop collection,” he said. “Next season I am coming back to something super womanly, a new part of the Jacquemus identity.” It will be exciting to see where Jacquemus and his community of friends and collaborators go next—but maybe worth it to linger just a moment more in the halo of such a successful outing in such a beautiful light.