Southern Spain is still the favorite place for tourists to spend their holidays when coming to the country, although we are going to talk about a different part of the country, often less known by the tourists, which is Northern Spain. A trip to the North of Spain will allow you to discover a new world within the country with green scenery, mountains, valleys, rivers, and nature in its purest form. In addition to the historic charm and lively atmosphere offered by the cities in this part of Spain, each region has its own architecture and its own gastronomical and cultural traditions. 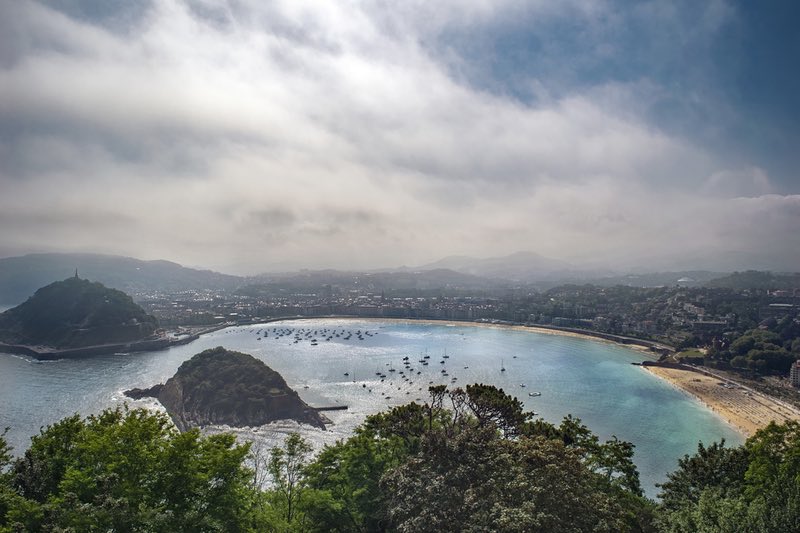 Here you will be away from the crowds, and you will find the best gastronomy and the best wines such as Rioja or Albariño which are produced in this area. If you are a lover of the beaches and the sea, here you can find many beaches located under high mountains and cliffs, and if you love walking and adventure, you can do the Camino de Santiago or even some parts of it since it crosses all the North of the country.

The north of Spain is a paradise for hiking, rural life, and outdoor activities, and wherever you go you will find a warm welcome and great hospitality. This area is quite hilly and some parts have quite high mountains. The landscape is rather impressive, green, and full of forests.

One of the most beautiful cities that you can visit in all of Spain and in all of Europe is the picturesque city of San Sebastián. Located in the Bay of Biscay.

The city of San Sebastián has a pedestrian-friendly Old Town where you can try the best cheesecake of all Spain at the La Viña restaurant. In this area, you can find all the most popular pintxo bars and restaurants. A pintxo is a small portion of food that in the past consisted of bread with a top. But this concept has evolved with time and nowadays a pintxo can be a small portion of any type of food. Some of the most popular ones that you can find in the city are prawns with bread, batter-fried shrimp, croquettes, or salads. The price of each pintxo goes from 2 to 4 euros depending on the food type and the bar you visit.

San Sebastián has a great mix of architectural styles due to its expansion during the Belle Époque. Many French-style buildings started to be built because the nobility and high society began to spend their holidays in San Sebastián in the 19th and 20th centuries. One of the options to get accommodation in this city is by renting an apartment in San Sebastián city center, which will allow you to get impressive views of La Concha Bay.

For music lovers, the city celebrates a Jazz Music Festival and, of course, one of the most important film festivals in all of Spain, the San Sebastián Film Festival where many national and international film stars attend every year. 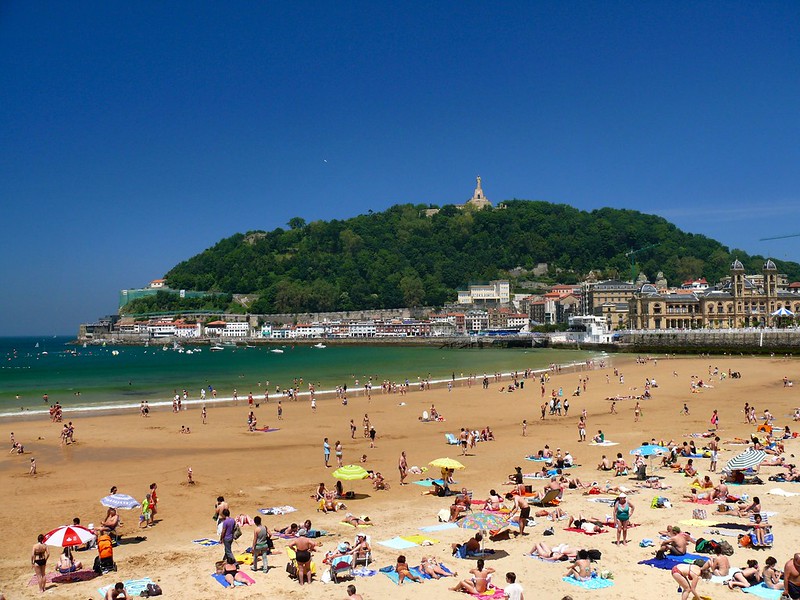 Zurriola beach is one of the best-known beaches in the city, especially for surfing. In this part of the city, you can experience the surfing passion that there is in the Basque Country.

When you visit San Sebastián, you cannot miss visiting and strolling through La Concha beach, from where you can see the island of Santa Clara in the background, and the two mountains that border the city Mount Urgull and Mount Igueldo. The city of San Sebastián was built up next to the sea and La Concha beach is one of the most famous urban beaches in the world for its beauty and nature.

San Sebastián is a city with three urban beaches, so that going for a walk and discover its beaches is also a great option. To have one of the best views of the city you can climb to the top of Monte Igueldo where you can get a ticket to go up the Torreón tower. From there you will get breathtaking panoramic views of the city and the sea.

If you like cooking and trying new styles of cuisine, you will be delighted to be in San Sebastián, as the city has an incredible seventeen Michelin-starred restaurants, including three of the seven Spanish restaurants awarded with three Michelin stars. It has the second most Michelin star restaurants in the world just behind Tokyo.

San Sebastián continues to attract many visitors and is one of the most attractive cities in the whole of North Spain due to its beauty and nature. San Sebastián is also a good starting point to get to know the province of Gipuzkoa and the neighboring towns such as Pasaia and Hondarribia. It is a city that is continuously growing and expanding with a stable local economy. 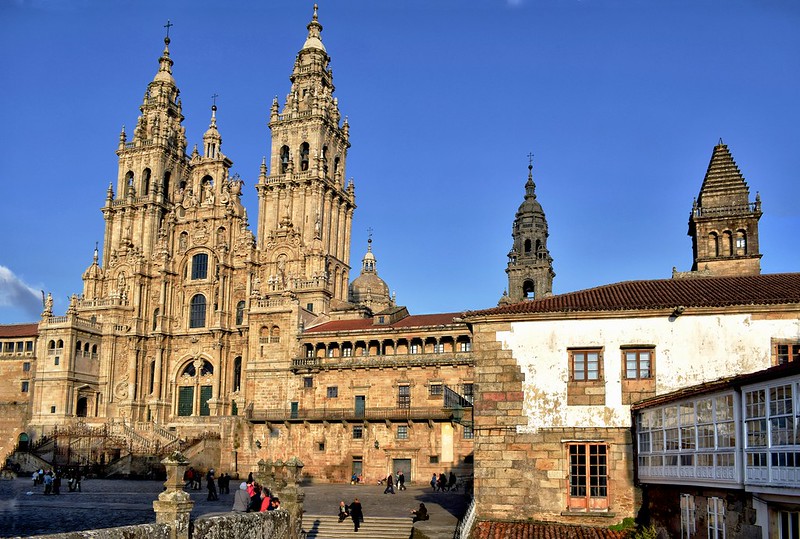 The most important monument in the city is the Cathedral of Santiago de Compostela where it is the tomb of the Apostle Santiago. The Camino de Santiago pilgrim route is more alive than ever, and every year thousands of pilgrims embark on an adventure to get to Santiago, especially in spring and summer when the weather is better to walk than in winter. Most of them start in France like in past times and walk for one month until reaching Santiago.

The Cathedral of Santiago de Compostela is one of the most important Christian churches in Spain. The ornate exterior combines the original 12th century sculpted door of the Pórtico de la Gloria. In addition, it has two baroque towers 75 meters high that can be seen from all over the city.

Another of the essential attractions of Santiago de Compostela is the Hostal de Los Reyes Católicos, built by the Catholic Monarchs Fernando de Aragón and Isabel de Castilla at the end of the 15th century to welcome pilgrims. Today, this magnificent Gothic building is a five-star hotel and is located right next to the Cathedral in Plaza del Obradoiro. It is one of Spain’s government-run “paradors”. The Parador system often uses old historic buildings like this and turns them into world-class hotels.

This hotel is considered the oldest hotel in Europe, the Parador Hostal de los Reyes Católicos is a luxurious hotel with large reception rooms, an interior patio, and rooms decorated in a traditional style. It also has a restaurant specialized in local Galician cuisine. 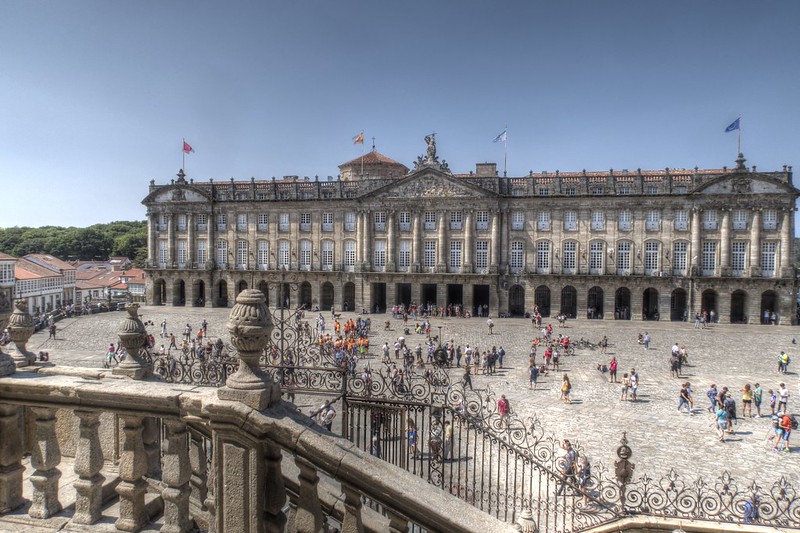 It is worth visiting the entire Old Town of Santiago de Compostela, around the Plaza del Obradoiro and the Hostal de Los Reyes Católicos since it was declared as part of the World Heritage Sites by UNESCO. This pedestrian zone is formed by narrow medieval streets, churches, and squares. In addition, there are also some portals where you can shelter from the rain, since Santiago de Compostela is one of the places where it rains the most in all of Spain. The rain also gives a special charm to the city, however, we recommend bringing a raincoat just in case.

Santiago de Compostela is a lively city full of students, pilgrims, and tourists who every year go to the city to study or see its amazing Cathedral. Its streets are full of small restaurants where you can try the local Galician cuisine and usually, the menu of the day will cost around 10 to 15 euros.

Oviedo is the capital of Asturias and is especially known for its cider making. Asturias became very popular among international travelers, and especially American tourists, when it appeared in a list of the New York Times in 2020 in its article “52 places to go”. One of the best ways to get to know Asturias is by visiting the capital Oviedo, an elegant city located on the pilgrimage route to Santiago de Compostela.

The city of Oviedo is also famous for its university and, as in most university towns, Oviedo has a lively nightlife. It is quieter in summer when students go on vacation.

Although there are many things to see in Oviedo, perhaps the most important thing to do is to visit its pre-Romanesque churches. In Oviedo, there are three small churches built in a pre-Romanesque style unique in Spain due to the fact that this part of the country has been one of the few areas that was not invaded by the Moors during the invasions that took place from the 9th century afterward. None of these churches is in the city center, but they are quite close to the city.

The most important church is Santa María del Naranco, located about a 45 minutes’ walk from the center of the city of Oviedo and from where you can get an impressive view of the entire city and its surroundings.

The other two churches of pre-Romanesque style are El San Miguel de Lilio and San Julián de los Prados. The latter is very close to the city and only a ten-minute walk away, and it still has the frescoes that once covered its entire interior.

During your visit to Oviedo, you cannot miss visiting the square Plaza Alfonso II, which is the heart of the Old Part of the city, and where the Gothic cathedral of Oviedo is located. Part of the cathedral contains the Holy Chamber, also known as the Chapel of San Miguel, built in the 9th century (although largely remodeled in the 12th) where you can find some special religious relics which are the Holy Chest, the cross of the Angels and the cross of La Vitoria.

Visiting the cathedral and the Chapel of San Miguel is part of the pilgrimage to Santiago de Compostela. The Holy Chamber of Oviedo is a UNESCO World Heritage Site along with its pre-Romanesque churches and the medieval fountain, La Foncalada, built in the 9th century which is the only example of pre-Romanesque civil architecture in Europe.

In Oviedo, there are several museums such as the Archaeological Museum located in an 8th-century monastery and where you will have the opportunity to visit Prehistoric sculptures and different types of objects from that time. Another museum that you can visit is the Museum of Fine Arts, located in an 18th-century palace. This is a good opportunity to see the interior of the building together with the collection of Asturian and Spanish paintings.

Walking and discovering Oviedo will remind you of the movie Vicky Cristina Barcelona by Woody Allen ??since some of the scenes were shot here. In addition, if you like to walk in Oviedo there are some very beautiful parks, such as the San Francisco Park, located in the city center, or the Winter Park, located just to the south of the city and with some very beautiful walks. Oviedo is the main point to discover Asturias, and from this city you can get to one the most impressive places is Spain which is the mountain chain of the Picos de Europa.